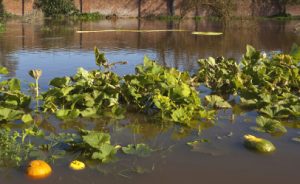 Heavy rains and the flowing water that results can contaminate plants growing in the garden and create a food safety hazard. As floodwater moves into your garden, it can carry raw sewage overflow, farm and domestic animal waste, river or pond water, and agricultural run-off, all of which can be sources of human pathogens such as norovirus, Salmonella, and pathogenic E. coli. Gardeners and other people who mishandle and/or consume fresh produce exposed to floodwater are at risk of gastrointestinal illnesses, with accompanying symptoms such as vomiting, stomach cramps and diarrhea.

The flooding and heavy rains late in the 2018 growing season (August 2018) present a problem for the home gardener. Many crops are at, or approaching, peak ripeness and it’s not feasible to let produce mature for another 2-3 months while pathogens die through natural exposure to sunlight and the environment. The question then becomes: how do I salvage as much garden produce as possible from a garden exposed to late-season flooding?

If rain, and only rain, fell on the garden, you can continue to enjoy the bounty of the season. However, if your garden was reached by flood waters from a nearby stream or lake, or if flowing water carried animal waste or possible contaminants from nearby fields or compost piles, garden produce may be risky to consume.

Discard produce that has come into direct contact with floodwater

What to do if flood waters entered your garden? The most conservative approach is to destroy any produce that comes into direct contact with floodwater. And whether exposed directly or indirectly to floodwater, any produce that is meant to be eaten raw should not be consumed. This means that crops such as lettuce and other leafy greens should discarded. While some thick-skinned crops may be able to be salvaged (see below), any soft fruits such as raspberries or blackberries which are impossible to clean should also be discarded and soft-skinned crops such as tomatoes, peppers, and eggplants should be destroyed. Cantaloupe and other netted melons present a higher risk to human health and the safest action is to discard these crops as well.

There are fruits and vegetables that may be salvaged if they can be cleaned and are cooked before eating.  Wait at least 72 hours after standing water recedes before harvesting. Then thoroughly clean and cook produce before eating.

Root crops, including carrots, parsnips, beets or potatoes should be cleaned to remove dirt and contaminants by rinsing in clean potable (safe for drinking) water, followed by rinsing in a dilute bleach solution, and then given a final rinse in clean water. Soap should not be used for rinsing produce, just plain, clean water. These crops should be peeled and cooked before consuming.

Winter squash, winter melons, and pumpkins with their thick rinds can be washed and rinsed in potable water, then sanitized in the dilute bleach solution described for root crops and rinsed. Allow to air dry prior to peeling and cooking.

The change in the weather and cooler temperatures makes it impossible to recommend consuming any produce items raw where there is any risk of exposure to flood waters, even from splashing. So, plan to cook any produce that you will harvest from flooded gardens for the remainder of the season.

Good habits in the kitchen will help ensure that you are not spreading contamination as you prepare salvaged produce. Wash your hands after handling produce exposed to floodwater; use soap and water and scrub for at least 30 seconds. Dry hands with a disposable paper towel. Be sure to clean counter tops, cutting boards and utensils that have been used to prepare salvaged produce for cooking, or eating after cooking.

In order to prevent the spread of contaminants within the garden, remove soil, plant debris, and sap from garden tools and harvesting containers used to handle produce from flooded fields. Rinse tools and containers with clean water and then sanitize with a disinfectant such as Lysol, or a dilute bleach solution. Allow to air dry.

We teach, learn, lead and serve, connecting people with the University of Wisconsin, and engaging with them in transforming lives and communities.

Connect with your County Extension Office »

Find an Extension employee in our staff directory »

Feedback, questions or accessibility issues: info@extension.wisc.edu | © 2023 The Board of Regents of the University of Wisconsin System
Privacy Policy | Non-Discrimination Policy & How to File a Complaint | Disability Accommodation Requests

An EEO/AA employer, University of Wisconsin-Madison Division of Extension provides equal opportunities in employment and programming, including Title VI, Title IX, the Americans with Disabilities Act (ADA) and Section 504 of the Rehabilitation Act requirements.